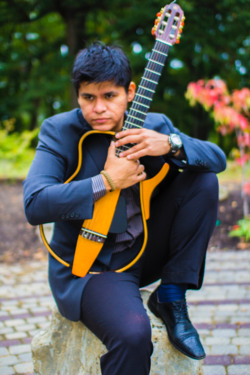 Defying all musical labels, Argentine guitarist/composer Cristian Perez weaves together genres from throughout the world to reveal the universality of music. With a strong foundation in classical, jazz and South American music, he crafts a singular voice, rich in sensitivity and nuance, that freely explores the possibilities of music as an art form. Cristian had the honor of being an Artist in Residence at Strathmore for the class of 2014-2015.


Cristian began taking piano lessons at the age of 5, but did not find his true passion until he picked up the guitar in his mid-teens after being inspired by rock groups from Argentina. Self-taught on guitar, he gravitated towards classical guitar after moving to the U.S. in 2002. Encouraged to pursue music by his high school teacher Ken Hall, Cristian met Paraguayan guitarist extraordinaire Berta Rojas, under whom he studied privately for two years.

Cristian went on to study classical guitar under Larry Snitzler at George Mason University, and quickly immersed himself in chamber groups, guitar ensembles, and jazz bands large and small. Cristian developed a passion for jazz, and began studying under jazz guitarist Rick Whitehead and saxophonist Tyler Kuebler. While pursuing a double-major in Performance and Jazz Studies at GMU, Cristian expanded his musical horizons and gained invaluable skills that make him unique as an artist. He was named a winner for the GMU Honors Recital four times (2009-2012), and was honored as an outstanding graduate upon completion of his Master’s Degree in 2012.

Cristian has performed with many of the best musicians in the Washington DC area (i.e.: Victor Provost, Joe McCarthy, John Kocur, Emmanuel Trifilio, etc.) and played at some of the top venues in the Metropolitan area, such as Blues Alley, Kennedy Center Millennium Stage, Bohemian Caverns, Bethesda Blues & Jazz Supper Club, and Twins Jazz. Cristian has performed in Canada and Dominican Republic, and in 2011, he performed as part of the GMU Jazz Ensemble in Shanghai and Beijing. Recently, Cristian has toured Bolivia and Korea.

Over the last few years, Cristian has embellished his musical palette by re-discovering the folk music of his childhood and exploring the music of other cultures, such as India and Japan. These influences have helped to shape Cristian’s original compositions and arrangements, which are featured in his quintet. Cristian's guitar is joined by flute, bandoneon, upright bass, and drums to form a hybrid ensemble - equal parts jazz combo, chamber ensemble and world music band. The group’s quest for beauty takes the listener on an ever-changing journey, past the conventional boundaries of genre and style. 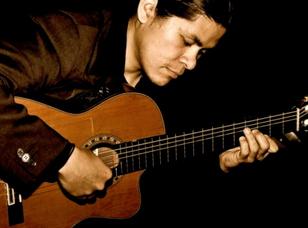